Partying in Miami is a different level and so celebrating the 4th of July is no exception.

While fireworks are not allowed before or after the 4th, or anywhere but the playa aka, the beach, I didn’t expect anyone to really follow these rules but si. That was the case.  Imagine. Give people guidelines and no problem. 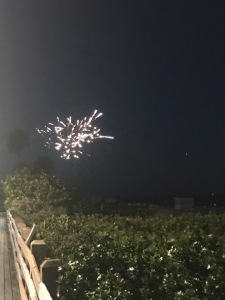 Sunset fell around 8:30-ish on the 4th.  A cacophony of beats, some samba, some bachata, some rap, some indescribable, all blended easily and effertlessly into one continuous harmony and extended up and down the beach. A collective rhumba, or party.  Children, teens, couples, parents, older people, people in wheelchairs on the boardwalk- all brought together to have a good time.

In the back of my mind, I wondered about people trashing the beach or stomping on the turtle nesting spots. I wondered if people would drink too much and start fights. I encountered nothing of the sort. In fact, what I saw were strangers coming together.  In fact, 2 young boys with their auntie found us or rather attached themselves to my husband and I and our family of 4 blended children. They helped us light fireworks, jump and play in the sand, play music and watch other fireworks light up the sky.

These 2 young men, boys, what does one call 14-year-olds, became an extended members of our vacation. Their aunt worked for the hotel where we stayed and they basically lived at the hotel and ate there for free.

Then, when 11 o’clock hit, the fireworks ended and beach goers either ceased setting off foreworks and continued to enjoy the ocean together or left. That was it. Oh, and the beach was spotless with trash cans filled. It was that simple. It should be that simple right!

Happy 4th of July everyone!