John and I set off from Kuala Lumpur for Kota Kinabalu (KK) in Brunei, northwestern Borneo.  Yes, you heard right.  I said Borneo.  I credit John for the idea of getting out of KL for an adventure.  The flight to KK only took a few hours.  Again, we took our chances on Malaysian Airlines across the remote waters to our destination.  Apparently, 2 Chinese tourists were taken hostage just 2 weeks before we arrived and one of the tourists was killed so we were advised to be careful and to stay close to the touristy area. 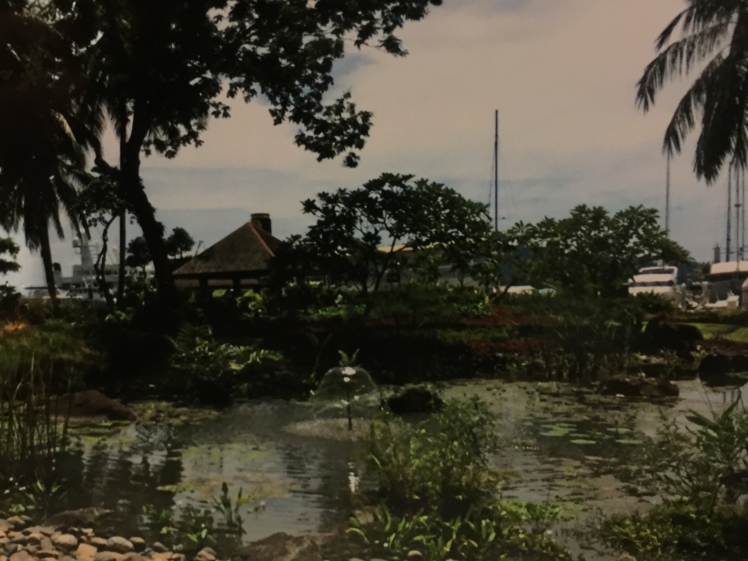 My thoughts turned to my grandfather who did something here with the Marines during WWII and talked about the headhunters.  Funny to be potentially walking in his footsteps, minus the headhunters.  Seems kind of cliche now.

KK Is inhabited more by the local indigenous population and John and I were invited as tourists to see how the locals live, work, play, etc. in their jungle huts.  John having grown up in the jungle wasn’t too impressed so I steered us into going white water rafting in the jungle instead.  Again, coming from the jungle, he had a difficult time wrapping his head around paying to go down a river.  But, he humored his Caucasian American wife.  It hadn’t rained much so the water was low.  It was just our raft and another family from China in another raft plus our guides.  They smoked like chimneys.  The topography was gorgeous.  John and the guides competed to see who could skip stones the greatest number of times.

Another expedition consisted of visiting a nature reserve dedicated to restoring the health of orangoutangs.  I was worried that we would actually be brought to a black market ring of terrible people posing as conservers who had locked up these poor creatures and charged unknowing tourists a high price to see endangered animals.  To my happy surprise, this was a legitimate operation and well-run.  We were escorted to a well partitioned area and allowed to witness orangoutangs during a feeding.  I have to admit that the area with these animals seemed so serene and peaceful similar to when I had the opportunity to see dolphins in the gulf.  They were magical and it was if they knew it.

We also walked along the board walk in KK and happened upon a local market.  I’ve always felt that checking out a local market is the best way to see the people, to see how people live, what they eat, and how they interact.  I’ve been able to see markets all over the world but never before have I seen one so…what’s the right word, remote?  They sold flavored water in reused water bottles.

I saw enormous green lobsters with orange and red colored dots down their spines flanking stalls.  We saw children selling CDs and DVDs which were displayed on thin material on the ground.  Another little boy wearing only cut off shorts lit firecrackers under the dock.  Fishing boats dotted the coast.  It was electric and interesting.  And oh how I wanted to taste all the different food!  But, John and I were already fighting stomach cramps, bloating and all other manner of terrible stomach parasitic symptoms.  We settled for a quite evening on the beach sipping cocktails and watching the sun set on the water.  Not bad for Borneo.

A few final notes about Borneo:

When John and I were at the airport in Kota Kinabalu, we noted that you could buy fresh fish and the vendor would pack it in a cooler for you so you could take it on the plane like a carry-on.  Also, I used the restroom at the airport and proceeded to wash my hands.  As I did, I noticed that I could hear water and my feet were getting wet.  I looked down and noticed that water flowed from the spout into the basin and straight onto the floor and ran to a drain.